They help people respond effectively to injustice in the world around us. As a national online force driven by over one million members, they move decision-makers in corporations and government to create a more human and less hostile world for Black people in America.

You can support their work right now by making a contribution. Every dollar you give is worth 10 points.

#JusticeforBre: Police officers who killed Breonna Taylor must be FIRED 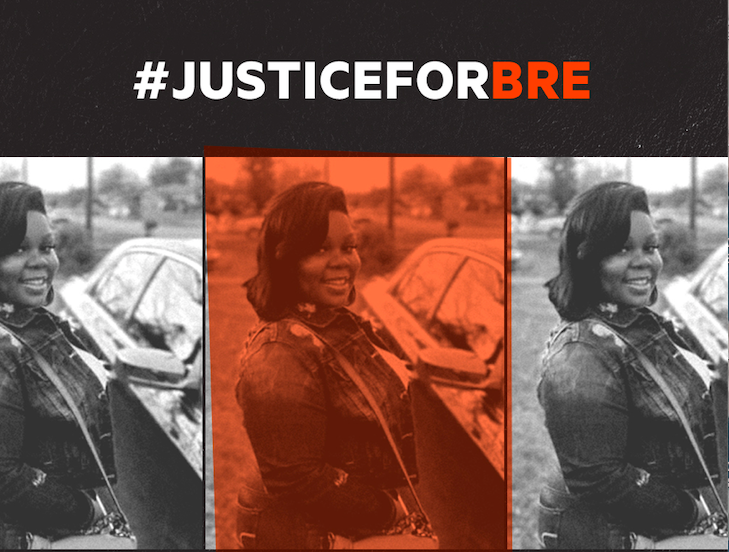 Prosecutors have failed to deliver justice for Breonna Taylor.

Kentucky Attorney General Daniel Cameron announced the decision we were all fearing he'd make: No murder charges will be filed against the police officers who murdered Breonna Taylor in her home. Just one officer was charged with "wanton endangerment," and it was NOT for shooting Bre.

By failing to bring murder charges in the brutal killing of Breonna Taylor, Attorney General Cameron has failed to deliver justice for Bre. Instead, after more than six months, all we've received is a second injustice as Bre's killers — Brett Hankinson, Jonathan Mattingly, and Myles Cosgrove — walk free with no murder charges.

We stand with Breonna's family, BLM Louisville, and local organizers and activists in demanding the Louisville City Council take immediate action to divest from the Louisville Metropolitan Police Department and invest in communities.

One of the officers who murdered Breonna Taylor was fired from the force. Brett Hankison, one of three officers who stormed Bre's home and murdered her in her sleep, was announced fired today by Mayor Greg Fischer.

This is a step in the right direction, but we know this is not what justice looks like and we refuse to settle for it. There are still two other officers, Jonathan Mattingly and Myles Cosgrove, on the force who were involved in Bre's murder. Mayor Fischer must fire ALL of them.

Louisville voted to ban "no-knock" warrants, the warrant that was used the morning Breonna Taylor was murdered while in bed. All power to the folks in Louisville who fought for this!

We have so much more work to do to get justice for our sister. Sign the petition to demand all officers are fired immediately and dial the mayor at 844-298-2731 to demand justice.

The FBI has announced an investigation into the murder of Breonna Taylor. We're still demanding Louisville Mayor Greg Fischer fire the officers now! Sign the petition and dial the mayor at 844-298-2731 to demand #JusticeforBre.

The charges against Kenneth Walker, Breonna Taylor's boyfriend has been dropped!

We are still demanding #JusticeforBre by calling for Mayor Greg Fischer to immediately fire all three officers for murdering Breonna. Keep fighting with us. Sign the petition.

Breonna Taylor. Say her name. And remember it.

Breonna Taylor, a 26-year-old Black woman, was in her home in Louisville, KY on March 13th when officers from the Louisville Metro Police Department barged in without a warning nor announcement and broke through her door, fired off more than 20 bullets, and ultimately took Breonna's life.

Her boyfriend, Kenneth Walker, thought someone was burglarizing their home and fired his gun to defend himself. But in turn, the officers responded with a hail of bullets and turned an average morning into a tragedy. The police were at the wrong house. There was no search warrant that gave them the right to be there in the first place.

Despite the clear and egregious misconduct of the police officers, Kenneth Walker is being charged with attempted murder and the murderers who killed Breona Taylor are walking free without any consequences. Instead of being transparent about their fatal misconduct, the police and commonwealth attorney conspired to make it look like this was a routine drug raid. LMPD even continued to falsely refer to Breonna as a "suspect" in the media for weeks though she had done nothing wrong. Nothing.

A recent lawsuit filed against the officers reveals that police were actually searching for another person more than 10 miles away, who had already been arrested that morning. This is an affront to Black people, our communities, and Breonna's family. They are charging her boyfriend with a crime to cover up, distract, and deflect from the fact they murdered a young Black woman in cold blood.

All too often, Black women face police harassment and violence at the hands of bloodthirsty racist cops who see no value in Black lives. Breonna, her boyfriend, and their families deserve more. She was an EMT that lived her life on the frontlines as an essential worker, and when we need people like her the most during this pandemic, cops ended her young life. Let's honor Breonna and hold the officers responsible for this tragedy accountable.

We're calling for the three police officers, Sgt. Jonathan Mattingly, Brett Hankison, and Myles Cosgrove, to be fired and charges for murder against all of them. These officers are threats to our communities and as long as they're allowed to wear badges Black people are not safe.

Here is the Petition:

I am outraged and horrified that Breonna Taylor was gunned down and shot more than eight times while in her home after officers barged in with no warrant and illegally took her life. More than two months after cops murdered her, they have faced no consequences and despite being responsible for the tragedy, they are still employed by the LMPD.

The LMPD officers, Sgt. Jonathan Mattingly, Brett Hankison, and Myles Cosgrove took Breonna's life as she was just resting in her home doing nothing wrong. No warrant, no announcement, and no need to be in her home in the first place. These officers must immediately be fired and charged with murder for illegally entering her home, their egregious misconduct, and taking Breonna's young life.

I am calling on you to fire and charge them now!

Sign Petition
You will earn 10 points
Both Propeller and the partner organization may contact you by email or phone with updates and other offers of engagement. You can unsubscribe at any time. View our Terms of Use and Privacy Policy. Submitting your mobile number signs you up to receive recurring text messages. Reply "STOP" to unsubscribe at any time. Message & data rates may apply.
Join Propeller Premier to earn double points on every action you take and much more.
Keep #Propelling!
Take Action