2018 is a big year in politics, crossing a major historical threshold that could reshape the entire political balance - for the first time, millenials will be the largest generation eligible to vote.

The transition will mark four decades of baby boomer dominance, who have been the largest generation of voters since '78 and the shift should benefit democrats. 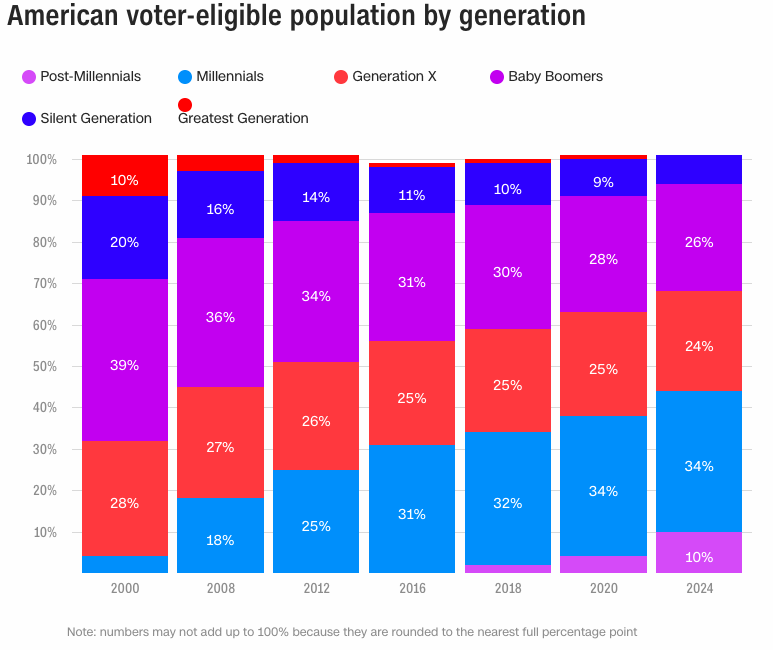 Baby Boomers, are predominantly white, and have leaned towards republican in recent years, about 3/5 of white voters over age 45 voted for Trump, in the last election. The millennial generation is racially more diverse, less religious, are largely democratic, and oppose Trump.

But if millennials continue to vote at lower rates than elders, especially in midterm elections like 2018, the effects won't be felt. Although millennials will be the largest population of eligible voters, experts believe it's likely they'll have a lower voter turnout. Polls consistently show a massive generation gap between parties, but if millenials are slow to convert the potential into power, democrats will lose at the ballot box.

The States of Change project, which studies demographics on political and policy implications, found that before the first group of millennial voters entered the electorate, voters under the age of 30 split almost evenly between parties in the 2000 presidential election. But as more and more millenials have poured into the voting booths, their votes have sharply shifted towards democrat (in 2008 Obama took 66% of millennial votes).

The big question remains - how many millennials, eligible to vote, will actually get to the polls? Recent census data calculated that under half of millennials eligible voted in the 2016 election. That number slightly improved from 2012, but was still far below the turnout from Gen x and baby boomers.

What's more, millenials underestimate the power of the midterm elections.

In the 2010 and 2014 midterms, voter turnout for under age 30 fell by over half from the presidential election just two years before, a far more significant decline than older generations. Less than 20% of eligible voters under age 30 voted in 2014 midterm election, the lowest figure for a generation since 1972.

A recent study, done by Democratic pollster Celinda Lake projected that less than half of millenials who voted in 2016 will turnout for the midterms.

With projections like these, millenials won't replace baby boomers in voter turnout until 2024, some believe it may not happen until later.

Not registered to vote? Have you moved? Want to change your party? Just turned 18? No problem. In just a few minutes, you can be prepared for the upcoming election.

Once complete, send a screenshot to hello@propeller.la confirming you've completed the form and earn 100 points on Propeller!

Note: Please allow up 1-2 business days for your points to post to your account after sending your confirmation.

For more on this, head over to CNN.

Join Propeller Premier to earn double points on every action you take and much more.
Keep #Propelling!
Take Action
Rewards