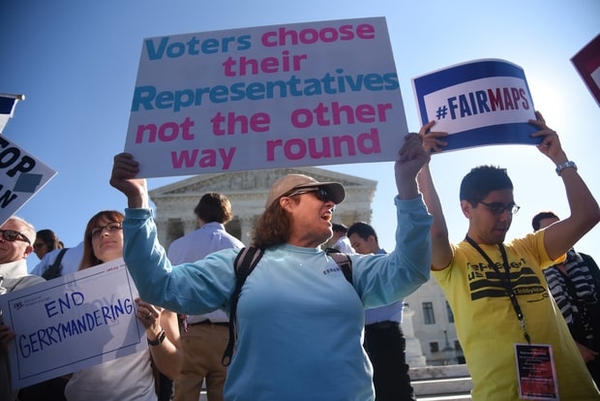 Republicans are facing a huge uphill battle in the 2018 midterm elections, with Trump being the most unpopular in modern American history. Yet because of sophisticated gerrymandering, Republicans who, before districts were redrawn, were highly unlikely to win, are now virtually untouchable.

"It's more challenging than it should be because of the way the districts are drawn," Jenni Dye, who works for Democrats in Wisconsin's state Senate said.

Gerrymandering in Wisconsin, is among the most extreme in the country, but it's part of Republicans’ grand plan to remain in control. Since Republicans took power, they've introduced some of the nation’s harshest voting restrictions, particularly affecting democratic leaning constituents. All the while, the state has been named the "Wild West of dark money,” due to republicans raising absorbent amounts of money from billionaire donors for their campaigns.

"Unregulated dark money combined with these voter-ID laws combined with gerrymandering is inconsistent with how our nation's system is supposed to be set up,” said Eric Holder, Barack Obama's attorney general. "American citizens ought to be concerned about the state of our democracy. We could end up with a system where a well-financed minority that has views inconsistent with the vast majority of the American people runs this country."

Despite widespread public opposition, its likely that in the 2018 midterm the GOP will remain in control.

"It's not a level playing field," said Tom Perez, head of the Democratic National Committee. "There are millions of people whose votes effectively don't count. We've been under a counterrevolution here for the past six years," said Matt Rothschild, executive director of the Wisconsin Democracy Campaign. "Walker has urged other states to follow his model. Reactionary politics is a big Wisconsin export now."

In 2011, the GOP controlled the state's redistricting process, for the first time since the 1950s, where Republicans redrew political districts based on 2010 census data. The legislators sneakily signed confidentiality agreements, agreeing to keep silent about the redistricting, even though it was financed by taxpayers, no democrat had seen them before they were shown to the public. There was only one public hearing just two days later and districts were reshaped the following week.

Wisconsin districts were radically transformed, some went from 50/50 swing districts to favoring Republicans by 16 points. Counties like Racine and Kenosha, which border each other, were formerly separate state Senate districts, which made sense: The counties have their own school districts, newspapers and boards of supervisors, both were politically fair and competitive. But Republicans combined the counties, for the first time in a hundred years.

The result? Republicans won two seats in the state Legislature.

In 2012, Obama won Wisconsin by seven points, and Democratic candidates received 51.4 percent of the state's vote, but Republicans still won 60 of 99 seats in the Statehouse. Under a newly drawn Republican map, the number of GOP seats in the 132-member legislature went from 55 to 69, all the while, swing districts decreased from 24 to 13. With gerrymandering, Republicans would maintain control of the state.

Wisconsin isn’t the only state with gerrymandering issues. After the 2010 elections, Republicans had full control of the redistricting process in 21 states. Now, Republicans now hold an additional 22 House seats because of gerrymandering, according to the Associated Press.

In the 2012 elections, Democratic House candidates got 1.4 million more votes across the country than Republicans, but because of Gerrymandering the GOP won 33 more seats. It’s fair to point out that Democrats are guilty of gerrymandering too, in states like Illinois and Maryland, but recently Republicans have crossed the line with manipulation of changing political districts.

This last election was Wisconsin's first that required voters to show government-issued photo ID. Where people without ID’s were given provisional ballots, that could only count if they went to the DMV to get a new ID and then had the board of elections confirm their vote within 72 hours of Election Day.

A federal court found that nine percent of registered voters in Wisconsin did not have a government issued ID. Black voters, who overwhelmingly support Democrats, were 50 percent more likely to lack the right identification for voting.

Republicans claim voter-ID laws are needed to stop voter fraud, yet according to studies, there were only 31 cases of voter fraud out of more than 1 billion votes.

The strategy worked. Wisconsin ranked second across the country in voter turnout in 2008 and 2012, but in 2016 saw a 3.3 percent drop in participation.  Voter turnout decreased by 23 percent in black neighborhoods, that heavily favored Clinton, up to 45,000 people were prevented from voting across the state.

Then in 2013, the Supreme Court made matters worse by allowing states with histories of voting discrimination to create their own election rules without clearance from the federal government. The 2016 election was the first presidential race in over than 50 years without complete protections of the Voting Rights Act.

It’s estimated that over 1 million votes were lost because of ID laws or because they couldn’t register.

"It's not a coincidence that states that were badly gerrymandered during the last round of redistricting, like Texas, Wisconsin, North Carolina, Pennsylvania, also passed some of the most oppressive voter-ID laws," Holder said. "They are two parts of the same attack by the Republicans: They have systematically attacked Americans' right to vote."

What’s more, in 2010, the Supreme Court that was majority republican, rewrote America's campaign-finance laws to allow mega donors to donate unlimited sums of money, to political committees - a move that greatly helped Republicans.

Despite all of this, the lower courts are pushing back on unfair redistricting. On January 9th, a federal court shot down North Carolina's U.S. House map, that would have given Republicans a 10-to-three advantage over Democrats, marking the first time a federal court invalidated redistricting.

But even so, Democrats face an uphill battle in 2018’s midterm elections largely because of gerrymandering.

"If you have a wave election in 2018, it's entirely possible Democrats could win a significantly greater number of votes and not have the Congress that reflects that wave," Holder said. And that's not how democracy is supposed to work. Hanging in the balance are basic rights for millions of Americans – the right to vote, the right to fair representation, the right to not have elections auctioned to the highest bidder. Welcome to the 2018 election season.”

Join Propeller Premier now and earn double points on every action you take. Plus, be entered to win exclusive experiences and more!
Keep #Propelling!

Get Onboard
Take Action
Rewards